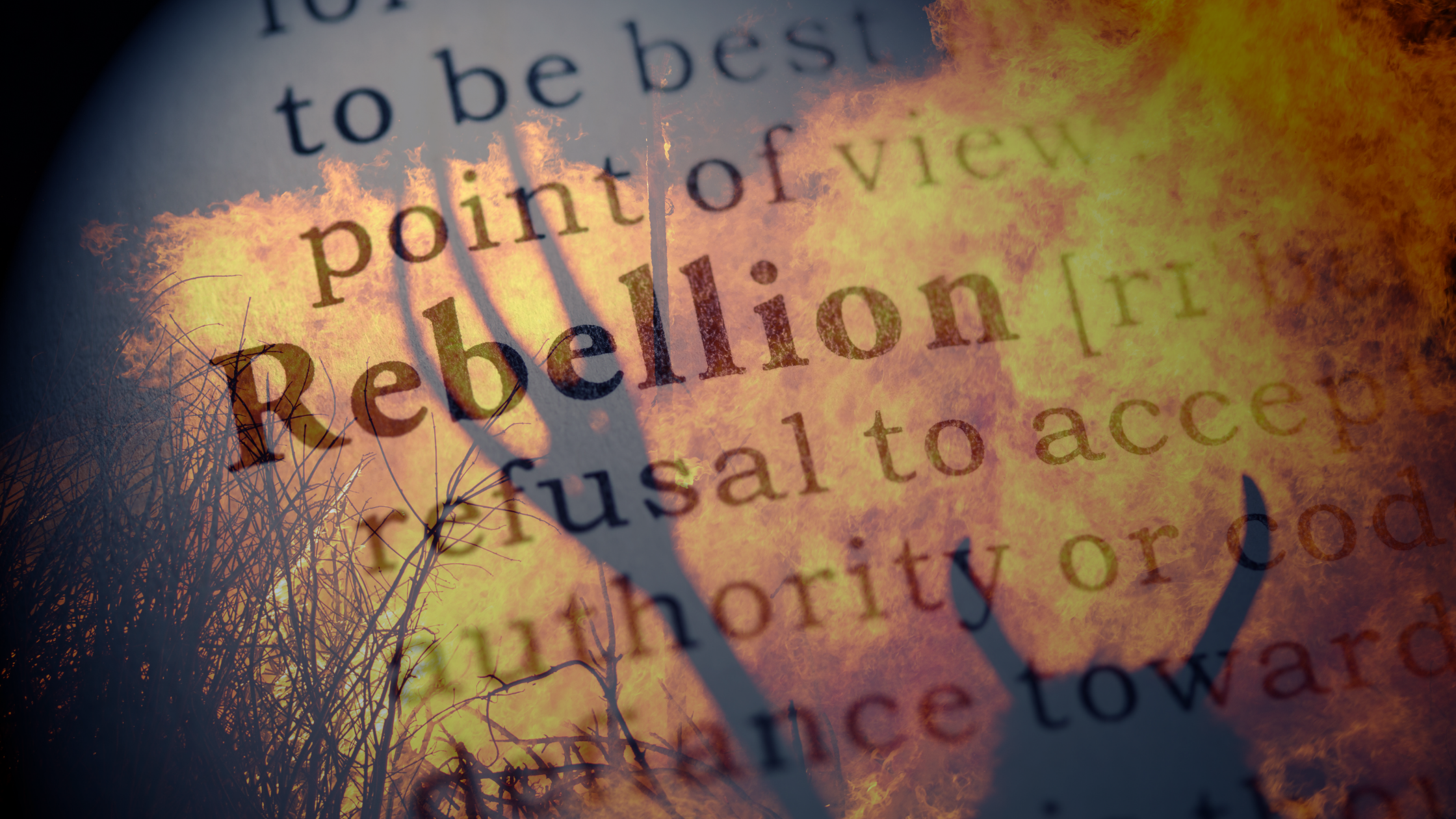 I’ve previously written a blog about “the rebellion”. You can read it by clicking here.

However, a new insight granted by the Spirit has allowed me to gain a deeper understanding of this coming “rebellion”. This new insight is what I want to share with you in this blog.

2 Thessalonians 2:1 Now concerning the coming of our Lord Jesus Christ and our being gathered together to Him, we ask you, brothers, 2not to be easily disconcerted or alarmed by any spirit or message or letter seeming to be from us, alleging that the Day of the Lord has already come. 3Let no one deceive you in any way, for it will not come until the rebellion occurs and the man of lawlessness—the son of destruction—is revealed

So, “the rebellion” must happen first before Jesus Christ can return.

Friends, it’s my honor to inform you that this coming “rebellion” is a rebellion against the kingdom of God —Mount Zion.

Moreover, “the man doomed to destruction” must also be revealed. And this will happen only after the fourth kingdom or “the beast” is finally ruling here on earth.

The “fourth kingdom” or the beast is a new type of government system. Many nations of the world will use this new system to govern their people.

While the “beast” manifests in the world, so does the kingdom of God. They will both appear at around the same time. This was prophesied by the prophet Daniel in the following verse.

Daniel 2:44 In the days of those kings, the God of heaven will set up a kingdom that will never be destroyed, nor will it be left to another people. It will shatter all these kingdoms and bring them to an end, but will itself stand forever.

In fact, God will use the 144,000 Israelite saints of the Book of Revelation to establish His kingdom.

Indeed, the kingdom of God is Mount Zion.

Moreover, the 144,000 saints will represent the house of Judah. They will testify to the kingdom of God along with the house of Israel.

The houses of Judah and Israel are also the “two witnesses”.

Additionally, nations will “stream” to Mount Zion when it finally appears.

Isaiah 2:2 In the last days the mountain of the LORD’s temple will be established as the highest of the mountains; it will be exalted above the hills, and all nations will stream to it.

And, when nations “stream” to Mount Zion they will become subject to the kingdom of God.

The False Prophet & The Image Of The Beast

Now, the false prophet will seem like they are part of the kingdom of God at first.

Revelation 13:11Then I saw another beast rising out of the earth. This beast had two horns like a lamb, but spoke like a dragon.

Additionally, the false prophet and the beast will mount an attack against the Kingdom of God. They will attempt to completely take over the kingdom of God from the saints.

Moreover, the nations that have become subjects to the kingdom of God will be unhappy with what has happened to them. Therefore, the people of the nations will gladly help the false prophet in persecuting the saints. This is the “rebellion” that was prophesied by the Prophet Daniel.

Revelation 13:13And the second beast performed great signs to cause even fire from heaven to come down to earth in the presence of the people.

Here’s a parallel prophecy of this event in the Book of Daniel:

Daniel 8:10 It grew as high as the host of heaven, and it cast down some of the host and some of the stars to the earth, and trampled them.

Psalm 104.4 He makes winds his messengers, flames of fire his servants.

Daniel 8:12 And in the rebellion, the host and the daily sacrifice were given over to the horn, and it flung truth to the ground and prospered in whatever it did.

The Image of the beast

After the false prophet has taken down the saints, he will create “the image of the beast“.

Revelation 13:14 Because of the signs it was given to perform on behalf of the first beast, it deceived those who dwell on the earth, telling them to make an image to the beast that had been wounded by the sword and yet had lived.

Revelation 13:15 The second beast was permitted to give breath to the image of the first beast, so that the image could speak and cause all who refused to worship it to be killed.

The Man Doomed To Destruction

In addition, the “false prophet” religion will completely dominate the political world as well. Then, “the man doomed to destruction” will become its leader.

Daniel 8:23 In the latter part of their reign, when the rebellion has reached its full measure, an insolent king, skilled in intrigue, will come to the throne.

In fact, “the man doomed to destruction” will be the last leader of the little horn religion.

In case you haven’t made the connection yet, the man doomed to destruction is Lucifer.

The prophecy by the Prophet Isaiah in the following passage is about Lucifer’s downfall.

Isaiah 14:12“How you are fallen from heaven, O Lucifer, son of the morning!
How you are cut down to the ground, You who weakened the nations! 13For you have said in your heart: ‘I will ascend into heaven, I will exalt my throne above the stars of God; I will also sit on the mount of the congregation On the farthest sides of the north; 14I will ascend above the heights of the clouds, I will be like the Most High.’ 15Yet you shall be brought down to Sheol, To the lowest depths of the Pit.

But before Lucifer’s downfall, the false prophet will exalt itself along with him.

2 Thessalonians 2:1 He will oppose and exalt himself above every so-called god or object of worship. So he will seat himself in the temple of God, proclaiming himself to be God.

Moreover, the man doomed to destruction will deceive people by declaring himself to be the light and the messiah. He will require people to worship him.

2 Thessalonians 2:9The coming of the lawless one will be accompanied by the working of Satan, with every kind of power, sign, and false wonder, 10and with every wicked deception directed against those who are perishing, because they refused the love of the truth that would have saved them. 11For this reason God will send them a powerful delusion so that they believe the lie, 12in order that judgment may come upon all who have disbelieved the truth and delighted in wickedness.

And at one point, the false prophet and the man doomed to destruction will control the whole world.

The Second Coming Of The Lord Jesus Christ

However, Jesus Christ will come the second time during the first resurrection.

2 Thessalonians 2:8 And then the lawless one will be revealed, whom the Lord will consume with the breath of His mouth and destroy with the brightness of His coming.

At the first resurrection, Jesus Christ will destroy “the man doomed to destruction”, the false prophet, and the beast.

But Jesus Christ will resurrect the saints and the elect. They are the two witnesses.

Revelation. 11:7When the two witnesses have finished their testimony, the beast that comes up from the Abyss will wage war with them, and will overpower and kill them. 8Their bodies will lie in the street of the great city—figuratively called Sodom and Egypt—where their Lord was also crucified. 9For three and a half days all peoples and tribes and tongues and nations will view their bodies and will not permit them to be laid in a tomb. 10And those who dwell on the earth will gloat over them, and will celebrate and send one another gifts, because these two prophets had tormented them.

11But after the three and a half days, the breath of life from God entered the two witnesses, and they stood on their feet, and great fear fell upon those who saw them. 12And the witnesses heard a loud voice from heaven saying, “Come up here.” And they went up to heaven in a cloud as their enemies watched them.

The “false prophet” will create “the image of the beast” in “rebellion” against God’s kingdom—Mount Zion.

Lucifer—the man doomed to destruction will rule in the new world order. He will be the epitome of “the rebellion” against God’s kingdom. He will be both a religious and political leader of the beast system. Finally, Lucifer will claim to be the messiah and the light. But Jesus Christ will return the second time to destroy him during the first resurrection.

That’s it for now my friends. Until next time, May God bless you all!