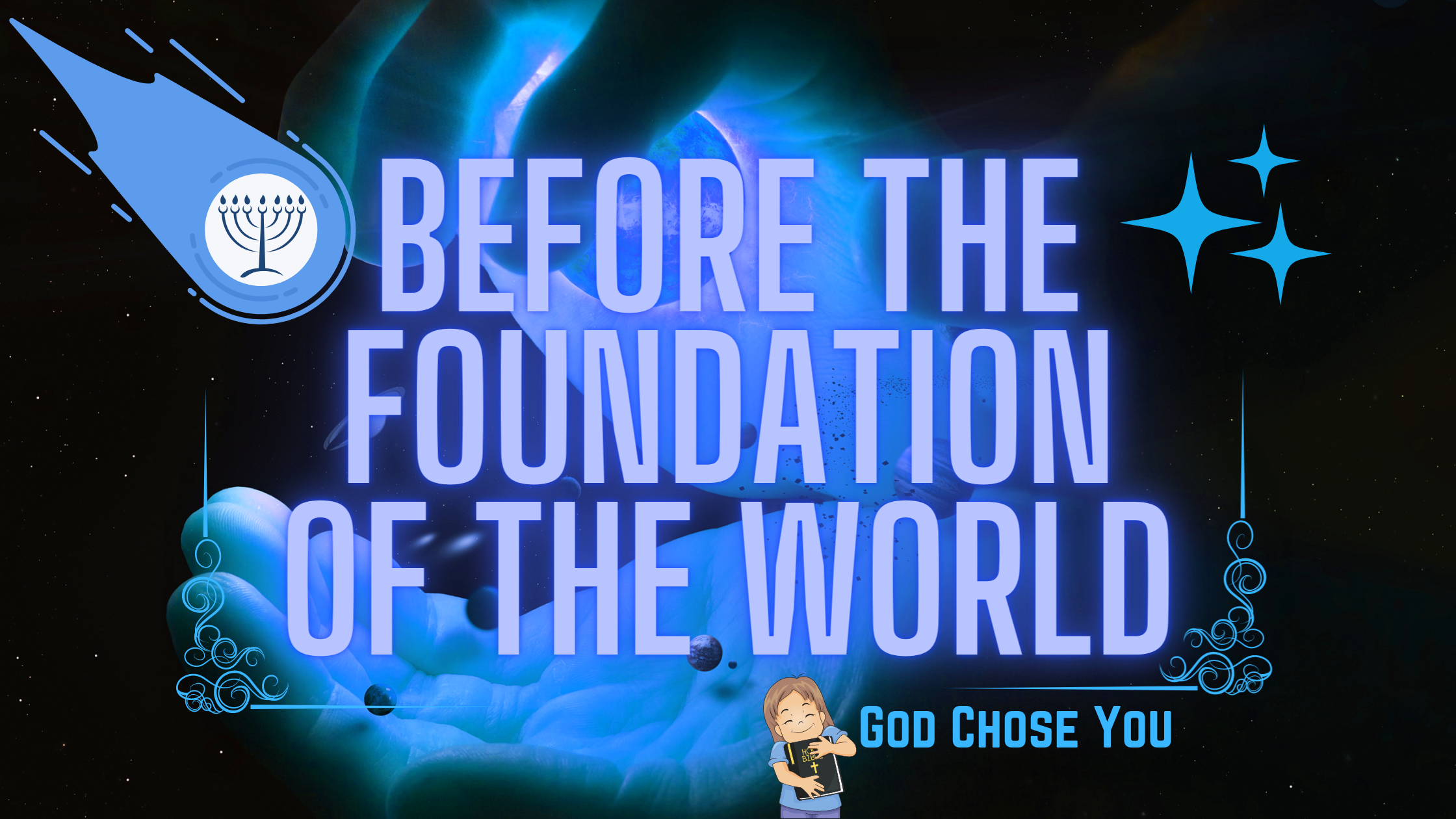 Before the Foundation Of The world

Before the foundation of the world

Ephesians 1:4 For He chose us in Him before the foundation of the world to be holy and blameless in His presence. In love.

Let there be light

You see before the foundation of the world and before time began God created light.

Genesis 1:1 In the beginning God created the heavens and the earth.

My friends, when God created light, this is where He chose us.

You see, God chose us to be in this light and not to be in darkness. That is how he chose us.

Additionally, light is God’s image. This is because God is light therefore His image is also light. And God created the Son in his image.

Hebrews 1:3 The Son is the radiance of God’s glory and the exact representation of His nature, upholding all things by His powerful word.

Moreover, we also as believers, God also predestined us to be conformed in the image of His Son.

Romans 8:29 For those God foreknew he also predestined to be conformed to the image of his Son, that he might be the firstborn among many brothers and sisters.

Additionally, in light is where God’s wisdom is hidden. In light is the hidden mystery that God destined for our glory before the time began.

1 Corinthians 2:7 .. we declare God’s wisdom, a mystery that has been hidden and that God destined for our glory before time began.

The Word is Light

The above verse can be interpreted this way:

The Word was only in the Spirit before Jesus was born. But then God caused his “Word” to manifest in the flesh in our Lord Jesus Christ, the Son Of God, the light.

John 1:14 And the Word became flesh and dwelt among us, and we beheld His glory, the glory as of the only begotten of the Father, full of grace and truth.

The word of God is true and confirmed by many witnesses. We are admonished to look out for the light to shine in our spirit.

2 Peter 1:19 And so we have the prophetic word confirmed, which you do well to heed as a light that shines in a dark place, until the day dawns and the morning star rises in your hearts;

Jesus Christ told us to let our light shine.

Matthew 5:16 … let your light shine before others, that they may see your good deeds and glorify your Father in heaven.

He wants us to shine on Mount Zion, the heavenly Jerusalem in the temple of God.

Matthew 5:14 You are the light of the world. A city that is set on a hill cannot be hidden.

We may not see “the light of the world” phenomenon in our lifetime but the prophet Isaiah prophesied that it will eventually happen when heavenly Jerusalem or Zion is restored.

Isaiah 60:1 “Arise, shine, for your light has come, and the glory of the LORD rises upon you.

The Kingdom Of Light

In light, God has prepared a kingdom for us to enjoy and be a part of.

Colossians 1:12 and giving joyful thanks to the Father, who has qualified you to share in the inheritance of his holy people in the kingdom of light.

So, a kingdom in the light is what God has prepared for us since the foundation of the world.

Matthew 25:34  .. the King will say to those on His right, ‘Come, you who are blessed by my Father, inherit the kingdom prepared for you from the foundation of the world.

In fact, we will rule as kings and priests in his kingdom someday if we continue in our faith.

1 Peter 2:9 But you are a chosen people, a royal priesthood, a holy nation, a people for God’s own possession, to proclaim the virtues of Him who called you out of darkness into His marvelous light.

And when the New Jerusalem comes, we will continue to be in the light.

Revelation 21:24 The nations will walk by its light, and the kings of the earth will bring their splendor into it.

God’s presence is light. Therefore when God finally lives with mankind in the New Jerusalem, we will feel his presence.

God chose us in the light before the foundation of the world and before time began. We are chosen since the beginning to be in the light.

God is light and Jesus Christ his Son, is the light. And we too, as believers are supposed to shine as lights because that is how we were chosen by God.

Philippians 2:15 so that you may be blameless and pure, children of God without fault in a crooked and perverse generation, in which you shine as lights in the world.

I hope the Holy Spirit has guided your understanding from reading this blog. May God bless you, brethren!

If you have questions, feel free to post comments, questions, and insights by filling out the form below.

Published in Kingdom Of God and Prophecies