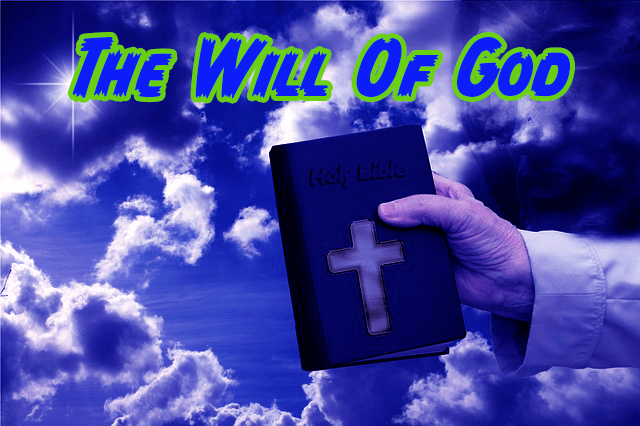 What is God’s Will?

Jesus Christ told us how to pray in the following verses:

Matthew 6:9 So then, this is how you should pray: ‘Our Father in heaven, hallowed be Your name. Your kingdom come, Your will be done, on earth as it is in heaven. Give us this day our daily bread. And forgive us our debts, as we also have forgiven our debtors. And lead us not into temptation, but deliver us from the evil one. ’

In the verses above, in what we now call ” The Lord’s Prayer”, the “will of God” is clearly stated in it with this line:

“Your kingdom come, your will be done, on Earth as it is in heaven“

Did you get from it that the Kingdom Of God is God’s will? I hope that it’s clear to you also.

In addition, Apostle Paul told us in the following verses:

Ephesians 1:10 “he made known to us the mystery of his will according to his good pleasure, which he purposed in Christ, to be put into effect when the times reach their fulfillment–to bring unity to all things in heaven and on earth under Christ.”

It is God’s will to bring about his kingdom here on Earth so that the things in heaven and on earth can be reconciled under the rule of Christ.

Trying to explain what the Kingdom Of God will take a while to do, but for now I will give you a general idea. Let us consult the Bible and see what it tells us about it.

But please keep this in mind, the kingdom of God is in the Spiritual realm. You cannot see it with your physical eyes, but you can discern it spiritually with your spiritual eye.

Jesus Christ gave us a clue in the following verse:

John 8:12 “Once again, Jesus spoke to the people and said, “I am the light of the world. Whoever follows Me will never walk in the darkness, but will have the light of life.”

Apostle Paul also understood what the Kingdom of God is about and gave us this command:

Colossians 1:12 “and giving joyful thanks to the Father, who has qualified you to share in the inheritance of his holy people in the kingdom of light.”

There is so much more to explain and I will write a separate blog dedicated entirely to the the Kingdom Of God. But I hope that you get the sense that it is a spiritual kingdom, a place that is above. We will cover more of this topic in my future blogs.

The world is operating under several systems. These systems do not necessarily acknowledge God or his Word. In other words, the world is not in line with God’s will yet. It does not account for the spirit or the spiritual realm.

The reason why the world is not in line with God’s will can be summed up in the following verse:

John 14:17 “the Spirit of truth. The world cannot accept him, because it neither sees him nor knows him. But you know him, for he lives with you and will be in you.”

The spiritual realm is not something the world understand because it does not recognize it. The world relies mainly on science to explain our physical reality and it does not take the spiritual world into consideration.

God’s plan is to bring about his kingdom that is in the spiritual realm and make it the system in the world through Christ and his people. When the world finally acknowledge that the spiritual realm plays a big part in people’s lives and existence, then at that point the kingdom of God will be able to fully manifest in the world. God is planning to accomplish this plan through his people.

Revelation 11:15 Then the seventh angel sounded: And there were loud voices in heaven, saying, “The kingdoms of this world have become the kingdoms of our Lord and of His Christ, and He shall reign forever and ever!”

Now, the verse below is telling us how the kingdom of God will take shape here on earth. I hope that you can discern the spiritual meaning of this verse.

Isaiah 2:2 “In the last days the mountain of the LORD’s temple will be established as the highest of the mountains; it will be exalted above the hills, and all nations will stream to it.“

Furthermore, we have many other prophetic verses in the Bible that prophesied about God’s will. The three verses below are all prophesies about the New Jerusalem.

Isaiah 60:3 “Nations will come to your light, and kings to the brightness of your dawn.”

Revelation 21:24 “By its light the nations will walk, and into it the kings of the earth will bring their glory.”

Isaiah 2:3 And many peoples will come and say, “Come, let us go up to the mountain of the LORD, to the house of the God of Jacob. He will teach us His ways so that we may walk in His paths.” For the law will go forth from Zion, and the word of the LORD from Jerusalem.

Those who believe in the “gospel of truth” will understand God’s will. This is because God has chosen them since the foundation of the world to be in the light. They will be part of God’s kingdom and will accomplish his plan through them.

1 Peter 2:9 “But ye are a chosen generation, a royal priesthood, an holy nation, a peculiar people; that ye should shew forth the praises of him who hath called you out of darkness into his marvellous light:“

And aposle Paul in 1 Thessalonians 2:12 admonished, “That ye would walk worthy of God, who hath called you unto his kingdom and glory.”

The “God’s will” is to bring about his kingdom here on Earth. It is up to a person to seek the kingdom of God and be a part of it. I will close this blog with a verse from the book of Psalm.

Psalm 25:14 “The secret of the LORD is with them that fear him; and he will shew them his covenant.”

I hope that this blog has helped you understand God’s will. May God bless you brethren and friends. Praise the Lord. Halleluyah!

Published in Kingdom Of God