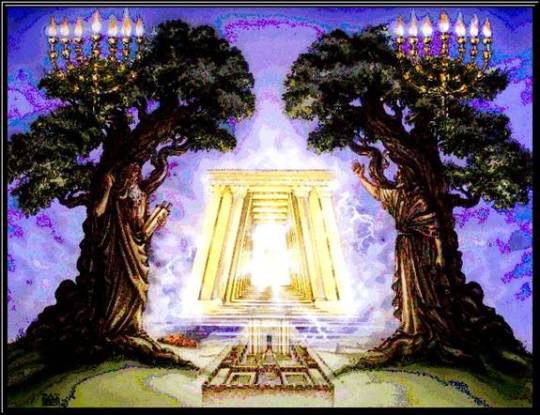 Who Are The Two Witnesses?

The Two Witnesses according to Revelation 11:4, They are “the two olive trees” and the two lampstands, and “they stand before the Lord of the earth.”

The Two Lampstands and The Two Olive Trees

We understand from the verse above that a lamp represents a church or a congregation.

The Prophet Zechariah had a similar vision of the lampstands and the olive trees.

Zechariah Chapter 4:2-3  “What do you see?” he asked. “I see a solid gold lampstands,” I replied, “with a bowl at the top and seven lamps on it, with seven spouts to each of the lamps. 3 There are also two olive trees beside it, one on the right of the bowl and the other on its left.”

“Do you not know what these are?” he inquired.

So he said, “These are the two anointed ones who are standing beside the Lord of all the earth.”

Furthermore, the prophet Jeremiah referred to Israel as an olive tree.

Jeremiah 11:16, The LORD called thy name, A green olive tree, fair, and of goodly fruit:

So, Israel represents an Olive Tree. Furthermore, Israel is divided into two factions. They are the House of Judah and the House of Israel.

1 Kings 16:21 Then the people of Israel were split into two factions; half supported Tibni son of Ginath for king, and the other half supported Omri.

Since that time, Israel has been divided into two houses. They are the houses of Judah and Israel.

Apostle Paul also in the New Testament referred to gentile believers as a wild olive shoot that has been grafted in to share in the nourishment of the olive root of Israel.

Romans 11:17 And if some of the branches be broken off, and thou, being a wild olive tree, were grafted in among them, and with them partakest of the root and fatness of the olive tree;

Anyone who believes and has faith in our Lord Jesus Christ will be counted as a member of  God’s household or congregation. You don’t have to be a “Jew” or a “Hebrew” by bloodline to become part of God’s household. Apostle explained in the following verses.

Ephesians 2:11 Therefore remember that formerly you who are Gentiles in the flesh and called uncircumcised by the so-called circumcision (that done in the body by human hands)— remember that at that time you were separate from Christ, alienated from the commonwealth of Israel, and strangers to the covenants of the promise, without hope and without God in the world. But now in Christ Jesus, you who once were far away have been brought near through the blood of Christ.

And in Ephesians 2:19-22  The Holy Spirit through Apostle Paul said, “Therefore you are no longer strangers and foreigners, but fellow citizens of the saints and members of God’s household, built on the foundation of the apostles and prophets, with Christ Jesus Himself as the cornerstone. In Him the whole building is fitted together and grows into a holy temple in the Lord. And in Him you too are being built together into a dwelling place for God in His Spirit.”

So the Gentile believers will also be part of the Olive tree of Israel therefore they will also prophesy along with the Two Witnesses.

The believers of the LORD  will be considered the Two Witnesses in the Last Days.  They are Judah and Israel, his Two Witnesses.

God will enable his Two Witnesses. He will give them power in order to fulfill this prophecy in the Last Days.

Revelation 11:3 And I will give power unto my two witnesses, and they shall prophesy a thousand two hundred and threescore days, clothed in sackcloth.

and in Revelation 11:6, They have power to shut up the heavens so that it will not rain during the time they are prophesying; and they have power to turn the waters into blood and to strike the earth with every kind of plague as often as they want.

The vision of Apostle John above about the Two Witnesses correlates with the vision of the Prophet Joel below.

Joel 2:28-32 And afterward, I will pour out My Spirit on all people. Your sons and daughters will prophesy, your old men will dream dreams, your young men will see visions. Even on My menservants and maidservants, I will pour out My Spirit in those days. I will show wonders in the heavens and on the earth, blood and fire and columns of smoke. The sun will be turned to darkness and the moon to blood before the coming of the great and awesome Day of the LORD. And everyone who calls on the name of the LORD will be saved; for on Mount Zion and in Jerusalem there will be deliverance, as the LORD promised, among the remnant called by the LORD.”

Therefore, we can conclude that the Two Witnesses are Judah and Israel.  They are the two olive trees and the two anointed ones, the two lampstands which are the two congregations of Israel.

Mount Zion is another topic I will cover in another blog.

I hope that this blog has helped you gain an understanding of who the Two Witnesses are. I will expand more on this topic in the future in other related topics.

May God bless you all!  All the glory be to God. Thank you LORD. Thank you Jesus Christ! HalleluYah!

Published in Prophecies and Zion