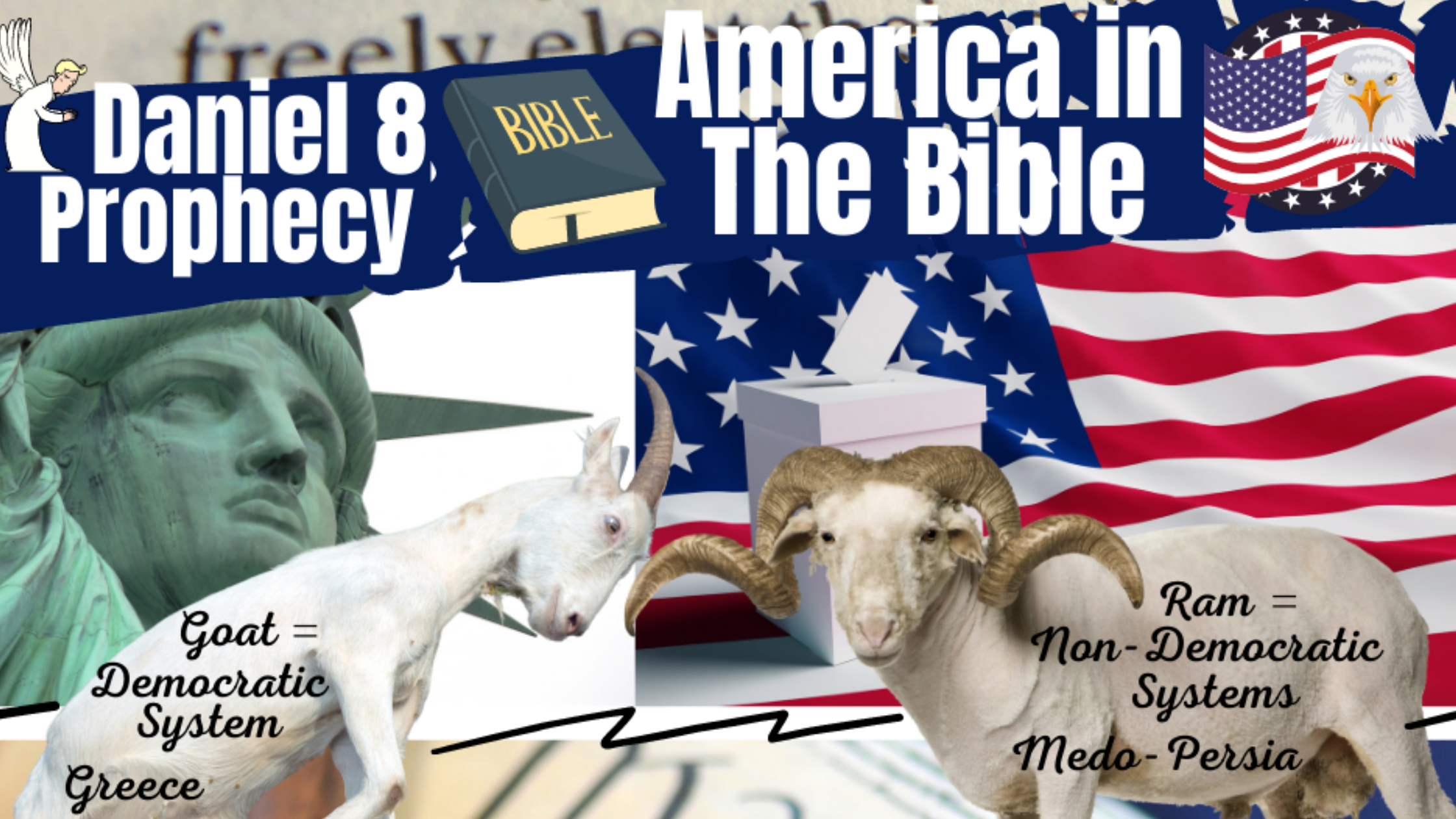 Where is America in Bible prophecy? It can be found in chapter 8 of the Book Of Daniel in the Holy Bible. The Holy Spirit made me understand the prophet Daniel’s vision of “a goat and a ram”. It is a prophecy about the United States of America.

To those who are familiar with Bible prophecies, you probably know that there are other interpretations of this prophecy already. Some of them claim that Alexander the Great is the goat’s “large horn” or the “first king” of Greece. But this short-sighted interpretation does not make sense. First, because Alexander did not cross the surface of the entire earth. Secondly, this prophecy relates to the end times. Alexander the Great ruled a few hundred years before Jesus Christ came to the world. It is now the year 2020 and the signs of the end times are here, but where is Alexander The Great now? Nowhere! And how is he relevant in today’s events? He is not! So I don’t think the goat’s “large horn” represents Alexander The Great at all.

Now let’s take a second look at this vision of the prophet Daniel.

Vision Of The Ram And The Goat

In the following verses, the prophet Daniel had a vision of “a goat and a ram”.

Daniel 8:1 In the third year of the reign of King Belshazzar, a vision appeared to me, Daniel, subsequent to the one that had appeared to me earlier. 2And in the vision I saw myself in the citadel of Susa, in the province of Elam. I saw in the vision that I was beside the Ulai Canal.

3Then I lifted up my eyes and saw a ram with two horns standing beside the canal. The horns were long, but one was longer than the other, and the longer one grew up later. 4I saw the ram charging toward the west and the north and the south. No animal could stand against him, and there was no deliverance from his power. He did as he pleased and became great.

5As I was contemplating all this, suddenly a goat with a prominent horn between his eyes came out of the west, crossing the surface of the entire earth without touching the ground. 6He came toward the two-horned ram I had seen standing beside the canal and rushed at him with furious power. 7I saw him approach the ram in a rage against him, and he struck the ram and shattered his two horns. The ram was powerless to stand against him, and the goat threw him to the ground and trampled him, and no one could deliver the ram from his power.

The archangel Gabriel gave the prophet Daniel the explanation of this vision in the following verses:

My friends, I’m here to inform you that the United States Of America is the large horn that represents the first king of Greece. Let me explain.

Greece in this prophecy represents Democracy and not the actual country of Greece. It is a historical fact that Greece is the birthplace of democracy. Democracy is an ideology that spreads throughout the entire world and toppled systems that are non-democratic. Because democracy originated in Greece, the Bible considers democracy as the spiritual kingdom of Greece. In this interpretation of Daniel 8 vision, I am convinced that democracy represents Greece.

Although America was not specifically mentioned by name in this prophecy, America is implied in the following lines:

Daniel 8:5 As I was contemplating all this, suddenly a goat with a prominent horn between his eyes came out of the west, crossing the surface of the entire earth without touching the ground.

When the spirit of democracy spreads throughout the entire world after World War 2, America is the main force behind it. The prominent horn of the goat that represents the first king of Greece is the United States America. This is because Greece represents democracy. It can be interpreted as “America is the first true leader of democracy.” The United States of America advanced the cause of democracy around the world like no other country. America also made changes in its own laws that gave its minority citizens the right to participate in a democratic process of selecting their country’s leaders.

This interpretation is a very controversial one and may not be accepted by many. But this is how it would turn out if you can accept that democracy is the spiritual kingdom of Greece.

When democracy reached its highest point, the large horn which represents America will be broken off into four parts as prophesied in the following verse.

Four independent nations will replace America in its place. But these new nations will not have the same power as the United States Of America once had.

Daniel 8:22 The four horns that replaced the broken one represent four kingdoms that will rise from that nation, but will not have the same power.

There is a parallel prophesy in Chapter 11 of the book of Daniel about this event.

Daniel 11:3 Then a mighty king will arise, who will rule with great authority and do as he pleases. 4But as soon as he is established, his kingdom will be broken up and parceled out toward the four winds of heaven. It will not go to his descendants, nor will it have the authority with which he ruled, because his kingdom will be uprooted and given to others.

If my interpretations of Greece and the goat’s large horn are correct, then America will be divided into four countries in the future. This idea is not that far-fetch since California has been trying to secede from the United States of America to become an independent country. According to ballotpedia.org, California would hold a referendum in May 2021 “on Whether California Should Become an Independent Country”. This would be possible if the people who are pushing for it succeed. If California becomes successful in its effort to secede from America, then other states could follow, thus fulfilling this end-time Bible prophecy. It is also possible that the breaking-up would be done through revolution.

Daniel 8:9 And out of one of them came forth a little horn, which waxed exceeding great, toward the south, and toward the east, and toward the pleasant land. 10And it waxed great, even to the host of heaven; and it cast down some of the host and of the stars to the ground, and stamped upon them. 11Yea, he magnified himself even to the prince of the host, and by him the daily sacrifice was taken away, and the place of his sanctuary was cast down. 12And an host was given him against the daily sacrifice by reason of transgression, and it cast down the truth to the ground; and it practised, and prospered. 13Then I heard one saint speaking, and another saint said unto that certain saint which spake, How long shall be the vision concerning the daily sacrifice, and the transgression of desolation, to give both the sanctuary and the host to be trodden under foot? 14And he said unto me, Unto two thousand and three hundred days; then shall the sanctuary be cleansed.

America is the large horn of the goat in the vision of the prophet Daniel of “a ram and a goat”. America will eventually be broken into four different nations according to this prophecy. From one of the four nations, a little horn, who would represent the “anti-christ”, will later emerge.

Until next time. May God bless you, brethren, and friends.