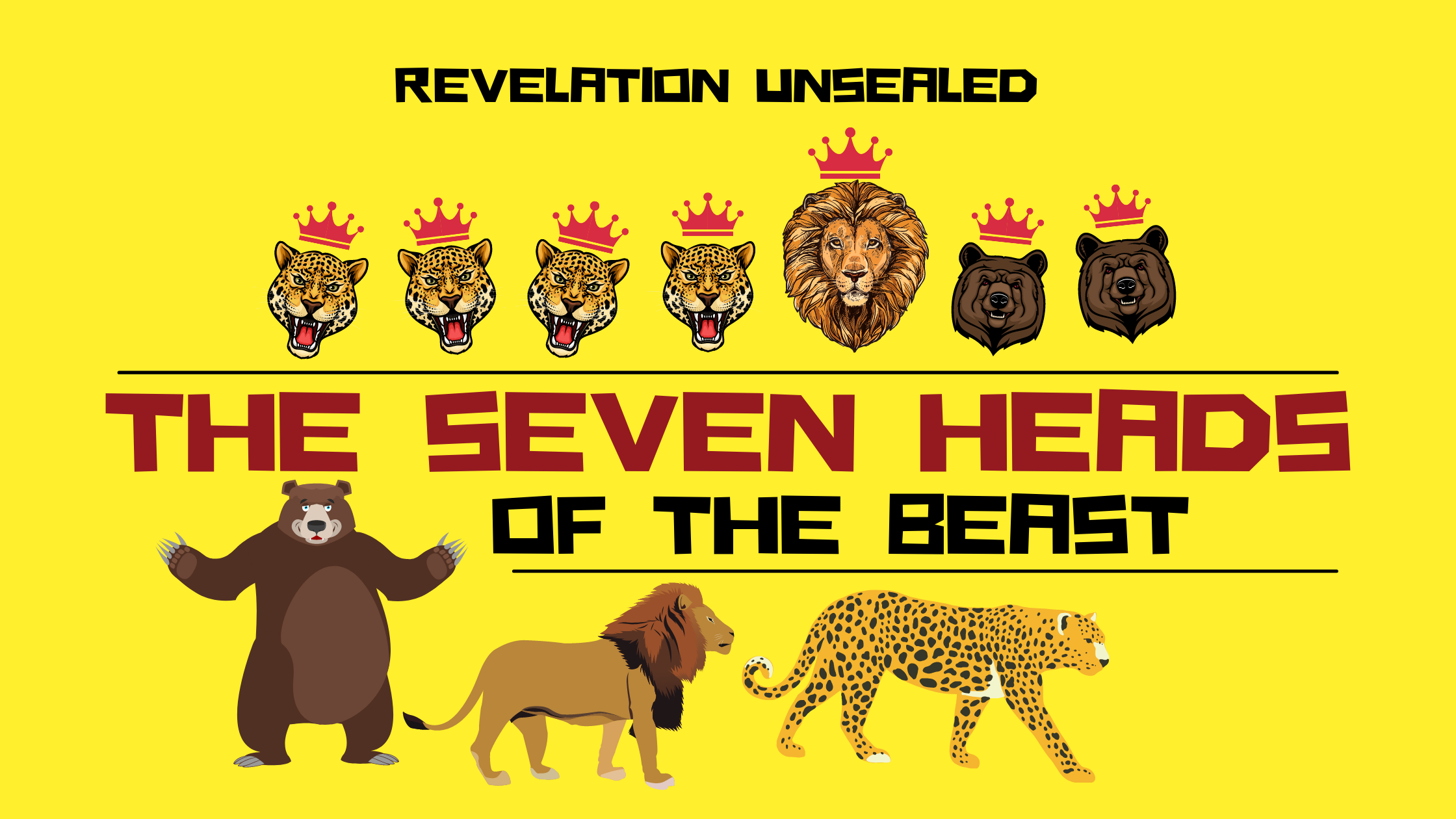 The Beast – Part 2: The Seven Heads

Now that we have some ideas about the characteristics of The Beast or the fourth kingdom, let’s look further into the symbology given to us by the Bible about this coming world government. In this blog, we will look into the symbology of the “seven heads” of the Beast.

Revelation 13:2 “Now the beast which I saw was like a leopard, his feet were like the feet of a bear, and his mouth like the mouth of a lion. The dragon gave him his power, his throne, and great authority.”

What the verse above is telling us is this: The Beast will look like a democracy (like a leopard) but will rule like an absolute ruler (feet like a bear) and it will have a religious mouth (the mouth of a lion).

Additionally, we’ve also learned about the “iron teeth” and the “bronze claws” of The Beast. The symbology represents tighter population control with the use of its great military might and on the political front, it will use democratic principles to catch its prey.

Now, let’s move on and learn more about this coming world government aka The Beast. Let’s look into its seven heads.

Revelation 17:9 This calls for a mind with wisdom. The seven heads are seven mountains on which the woman sits.

In the Bible, a “mountain” usually refers to a kingdom. A kingdom is a political or religious system or both, with dominion over people or nations.

In the verse below, God referred to Babylon as a destroying “mountain”.

Jeremiah 51:25 “Behold, I am against you, O destroying mountain, you who devastate the whole earth, declares the LORD. I will stretch out My hand against you; I will roll you over the cliffs and turn you into a charred mountain.

These heads are represented by the combined realms of Babylon, Medo-Persia, and Greece. They are types of government systems.

One head of The Beast belongs to the realm of Babylon. It’s a theocracy-autocracy type system.

Additionally, two heads belong to the realms of Medo-Persia, they are symbolized by the two sides of the bear and the ram’s two horns. One of the heads is the absolute monarchy rulership system and the other is the communist system. Medo-Persia as a whole is the realm of absolute rulership.

Finally, there are four heads that belong to the realm of Greece, they are symbolized by the “four heads” of the leopard in Daniel chapter seven. Greece represents democracy. These four heads are four types of democratic systems.

The Wounded Head Of The Beast

The Holy Bible tells us that one of the heads of the Beast will receive a “mortal wound”.

Revelation 13:3, “One of the heads of the beast appeared to be mortally wounded. But the mortal wound was healed, and the whole world marveled and followed the beast.”

You might not have heard this explanation for the “head” of The Beast that receives the “mortal wound” before. But I have insight into this. The head that gets the mortal wound is the “Babylon” head of The Beast system.

I got this insight from understanding that Babylon is a theocratic system, a form of government system.

Moreover, when the head of the “first beast” receives a “mortal wound”, The Beast would seem to have failed as a system.

The Beast system would eventually get revived by the arrival of the “little horn” or the “beast that came out of the earth”. The nations would be awe-struck by the appearance of the second beast aka the “little horn” because it would revive a system that they thought was already destroyed. The nations will all “follow” and “worship” The Beast as a result.

Then, it goes on to say that “…Five have fallen, one is, and the other has not yet come; but when he does come, he must remain for only a little while.”

My friends, as of now, we don’t have a complete explanation for the “seven kings” of the Beast. All we know is that there will be a nation representing the “Babylon” head of the Beast. This nation will be a theocracy. It will be a combined religious and political entity.

May God give us more insights into the identities of the rest of the “kings” on the heads of The Beast. We will return to this topic in future blogs, God willing.

Please keep this in mind, the “head” of The Beast that will get a mortal wound is the “Babylon head”.

I will explain this head with “mortal wound” later in this blog.

Although we have not completely figured out yet who the seven kings are on the heads of the Beast, the Bible is directing our understanding in the following verse.

Revelation 17:11,  “The beast that was, and now is not, is an eighth king, who belongs to the other seven and is going into destruction.”

The Mouth Of A Lion Or Babylon

The “beast that was and now is not” or “the eight king”, belongs to the “lion” or “Babylon” head of The Beast –a theocracy. It represents the revived “mouth of the lion”.

In the following verses, the “eighth king” or the “beast that came out of the earth” can be connected to the “mouth” that was given to The Beast.

When the “beast that came out of the earth” showed up, that’s when the first beast was given a mouth that “spoke words of arrogance” as described in the verses below.

Revelation 13:5, “The beast was given a mouth to speak arrogant and blasphemous words, and authority to act for 42 months. 6And the beast opened its mouth to speak blasphemies against God and to slander His name and His tabernacle—those who dwell in heaven.”

The eighth king or “the beast that was, now is not” is a theocracy. It consolidated all the powers of the “first beast” under its authority. The “eighth king” is the one responsible for reviving the entire Beast system.

Revelation 13:12, “And this beast exercised all the authority of the first beast and caused the earth and those who dwell in it to worship the first beast, whose mortal wound had been healed.“

The eighth king became the new “mouth” of The Beast. This is symbolized by “the mouth of a lion”. But this time, he holds all the powers of The Beast system.

Just to stress this point again, the “mouth” that was given to The Beast can be connected to the “little horn” in the vision of the Prophet Daniel.

Daniel 7:20, “I also wanted to know about the ten horns on its head and the other horn that came up, before which three of them fell—the horn whose appearance was more imposing than the others, with eyes and with a mouth that spoke words of arrogance.”

In conclusion, the “seven heads” of The Beast system are made up of the kingdoms of Babylon, Medo-Persia, and Greece. The attributes of these three kingdoms are present in The Beast system and they are considered the heads of The Beast. They represent theocracy, absolute rulership, and democracy. One head belongs to Babylon, two heads for Medo-Persia, and four heads for Greece.

Additionally, Babylon, Medo-Persia, and Greece are also considered as “mountains”.

The Babylon head of the Beast (theocracy) would suffer a “mortal wound” but would be revived by the appearance of the “little horn” which is also a theocracy.

Well, this is it for now. We have a lot more to cover. I hope that you’ve learned something from this blog so far. Please come back again.

Until next time my friends, may God bless you!