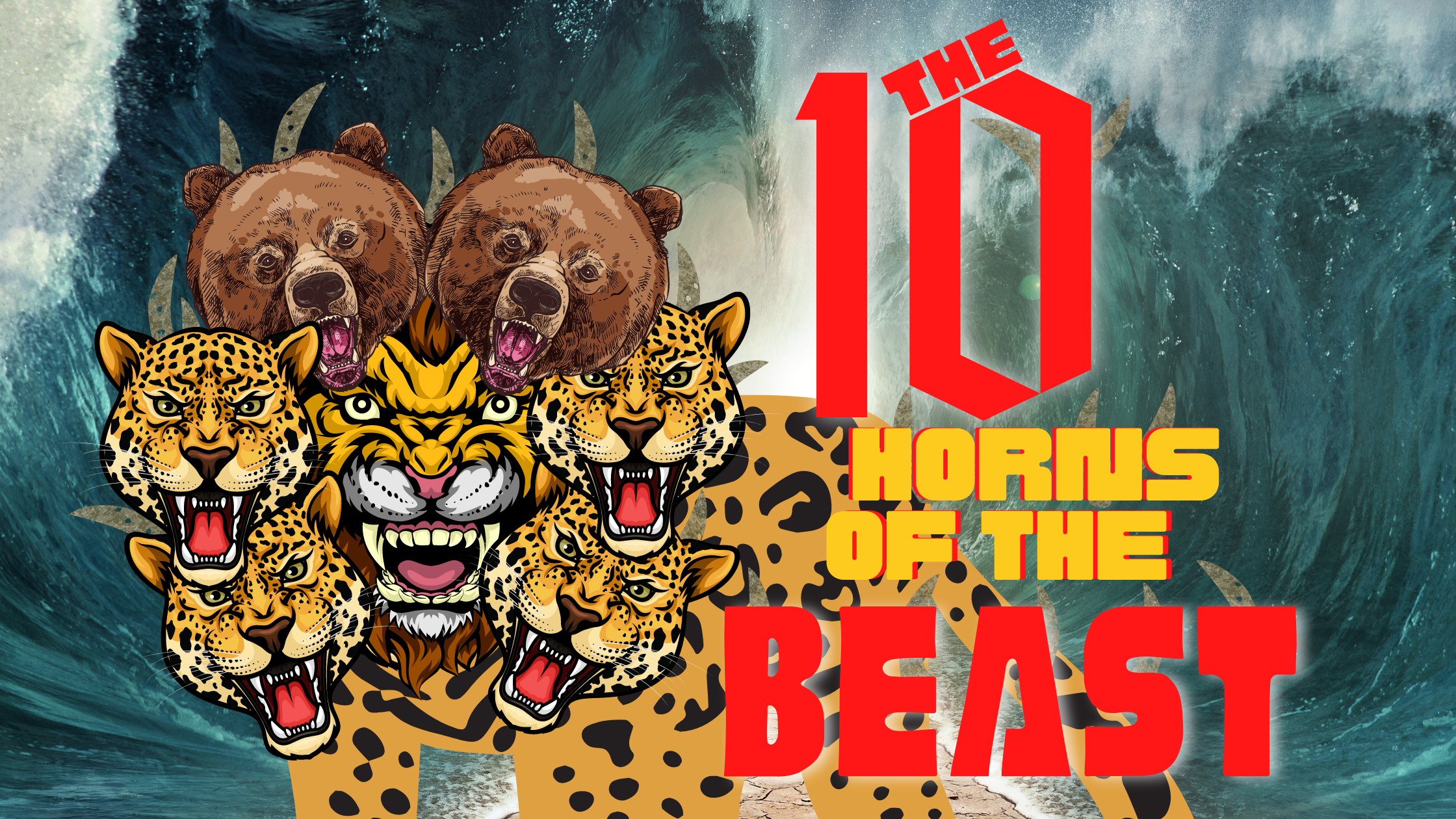 As much as we understand, the beast is not here yet. No, it is not Rome or the Catholic religion. The Bible is very specific about the identity of this fourth kingdom aka the beast.

In this video, we will look into the symbology of the “ten horns” of the beast.

Revelation 13:1 The dragon stood on the shore of the sea. And I saw a beast coming out of the sea. It had ten horns and seven heads, with ten crowns on its horns, and on each head a blasphemous name.

The vision of Apostle John of “the beast that came out of the sea” in the verse above is the “fourth kingdom” prophesied by the prophet Daniel in chapter seven of the book of Daniel.

Daniel 7:23 This is what he said: ‘The fourth beast is a fourth kingdom that will appear on the earth, different from all the other kingdoms, and it will devour the whole earth, trample it down, and crush it. 24And the ten horns are ten kings who will rise from this kingdom.

The beast of the Book of Revelation is also the same as the fourth kingdom prophesied by the dream of king Nebuchadnezzar in chapter two of the Book of Daniel.

Daniel 2:40 Finally, there will be a fourth kingdom as strong as iron; for iron shatters and crushes all things, and like iron that crushes all things, it will shatter and crush all the others. 41And just as you saw that the feet and toes were made partly of fired clay and partly of iron, so this will be a divided kingdom, yet some of the strength of iron will be in it—just as you saw the iron mixed with clay.

In the preceding verse, the ten horns of the beast are symbolized by the ten “toes” of the feet of the statue of King Nebuchadnezzar dream.

The interpretation of the Bible for a horn or king in these visions refers to a nation. The ten nations mentioned in the preceding verses above will unite to form a one-world government.

Revelation 17:12 The ten horns you saw are ten kings who have not yet received a kingdom but will receive one hour of authority as kings, along with the beast.

These ten nations or groups of nations will form to create a new world government system that the Bible refers to as the fourth kingdom or the beast.

Revelation 17:17 For God has put it into their hearts to carry out His purpose by uniting to give their kingdom to the beast, until the words of God are fulfilled.

The ten kings will use the beast government system to rule their nations. The beast system will look like a democracy but will rule like an absolute ruler and it will include a religious component as part of the government system.

In previous videos, we’ve discussed the “events that we need to look out for”. These events are needed to happen first before the Beast can appear in the world. We understand that the whole world must turn to democracy first.

According to the vision of the prophet Daniel of “a goat and a ram”, Greece or democracy will break the horns of the Medo-Persia kingdom. This means nations that are ruled by absolute rulers, monarchs and communist regimes must become democratic first before the Beast can show up. This view is consistent with a parallel prophecy about the third kingdom that will rule on earth. It is the kingdom of Greece or the realm of democracy.

Daniel 2:39 And after thee shall arise another kingdom inferior to thee, and another third kingdom of brass, which shall bear rule over all the earth.

When the whole world finally turns to democracy, the “first king of Greece” will break into four different nations. Then, one or more of the four nations that came from the broken horn of the first king of Greece will become part of the new world government aka the beast. One or more of these four nations will become part of the ten horns of the beast system.

Between the breaking into four of the large horn of the “shaggy goat” and the appearance of the “little horn”, the new world government aka The Beast will appear. The following verses gave us insight into this.

Daniel 8:9 From one of these horns a little horn emerged and grew extensively toward the south and the east and toward the Beautiful Land.

Daniel 7:20 I also wanted to know about the ten horns on its head and the other horn that came up, before which three of them fell—the horn whose appearance was more imposing than the others, with eyes and with a mouth that spoke words of arrogance.

When analyzing the preceding verses, please keep in mind that the “little horn” of Daniel chapter eight and the “other horn” that came up out of the ten horns of Daniel chapter seven is the same entity. It’s a theocratic entity. It is both a political and religious entity. We will cover this little horn separately in future blogs.

Revelation 17:16 And the ten horns and the beast that you saw will hate the prostitute. They will leave her desolate and naked, and will eat her flesh and burn her with fire.

As a result of the event stated in the verse above, The beast system will suffer a “mortal wound” on one of its heads. This head is the head of Babylon. The harlot is the nation representing the Babylon head of the beast which is the theocratic system. The harlot will eventually be replaced by the arrival of the “little horn”.

The beast is not here yet. It will not appear until the whole world turns to democracy first. When democracy and its first king finally break the power of absolute rulers and communist regimes, the first king of Greece will break into four nations. Then the beast will appear. One or more nations that will emerge from the broken up “first king” of Greece will become part of the ten kings of the beast. The little horn will also emerge after the beast is finally ruling on earth.

When the Beast is finally ruling here on earth, God will also install his kingdom in the same time period. Then the second coming of the Lord Jesus Christ is just around the corner.

There’s so much more to discuss my friends, but this is it for now. Please come back next time. Until then, May God bless you all.