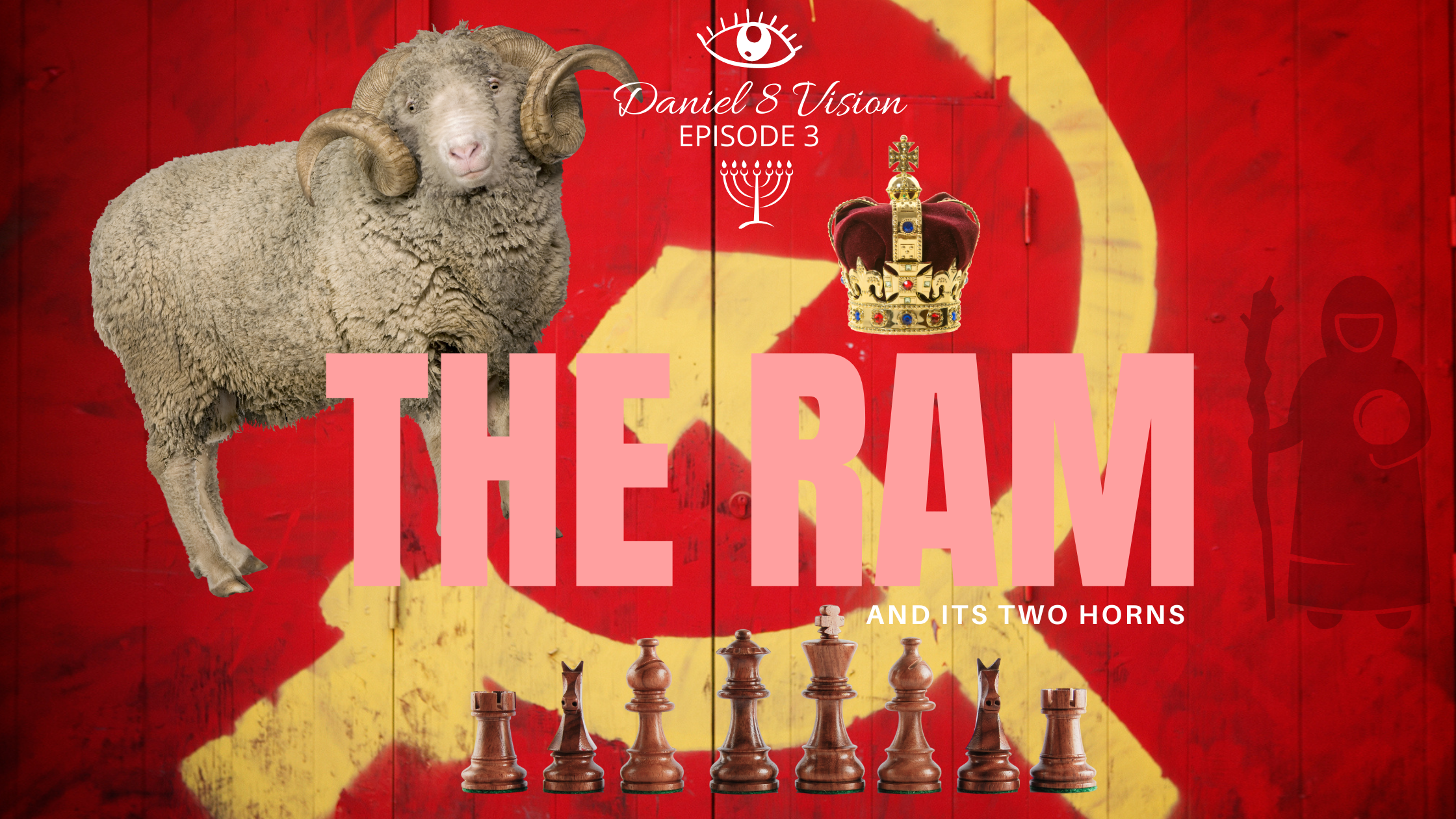 The Vision of a Ram and a Goat

Daniel 8:1 In the third year of the reign of King Belshazzar, a vision appeared to me, Daniel, subsequent to the one that had appeared to me earlier. 2And in the vision I saw myself in the citadel of Susa, in the province of Elam. I saw in the vision that I was beside the Ulai Canal.

3Then I lifted up my eyes and saw a ram with two horns standing beside the canal. The horns were long, but one was longer than the other, and the longer one grew up later. 4I saw the ram charging toward the west and the north and the south. No animal could stand against him, and there was no deliverance from his power. He did as he pleased and became great.

5As I was contemplating all this, suddenly a goat with a prominent horn between his eyes came out of the west, crossing the surface of the entire earth without touching the ground. 6He came toward the two-horned ram I had seen standing beside the canal and rushed at him with furious power. 7I saw him approach the ram in a rage against him, and he struck the ram and shattered his two horns. The ram was powerless to stand against him, and the goat threw him to the ground and trampled him, and no one could deliver the ram from his power.

We’ve also learned that the “time of the end” was kicked off by the First World War. The First World War spanned about four years, from 1914 to 1918. During The First World War, three more events that can be connected to the “end times” took place. First, there’s the Balfour Declaration that gave way to the creation of the State Of Israel. The second was the Russian Revolution that started the spread of communism around the world. And the third was the Spanish flu pandemic that could be considered a pestilence of biblical proportion.

I did more digging up on the First World War, and guess what I found? There were famines that happened during the First World War, most notably, the Persian famine of 1917 that lasted until 1919. It was a period of widespread mass starvation and disease in  Persia (Iran) during World War I. The total death toll as a result of the famine reached over 2 Million.

In addition to famines, there were many powerful earthquakes that occurred during World War 1 also. And there was a total solar eclipse on the 21st of August in 1914 only weeks after the outbreak of the First World War.

So, what are all of these additional information have to do with anything? Well, all these events were foretold by the Lord Jesus Christ himself when he was asked about “when” the time of the end would come. I think that all these events should also be taken into consideration.

Jesus Christ in Luke 21:10-11 said,  “Nation will rise against nation and kingdom against kingdom. There will be great earthquakes, famines, and pestilences in various places, along with fearful sights and great signs from heaven.

It’s been over a hundred years now since the First World War. So we are well into the “time of the end” my friends. We can expect the same types of events, with even greater intensities, to happen again and again until the second coming of the Lord Jesus Christ.

Friends, I hope that you know, that as believers, God will save those who put faith in him. This is why we are studying the Word Of God and the prophecies therein so that we know what we can expect to happen in the future well in advance. We are not in darkness that when these events suddenly take place, that they would overtake us.

The vision of the prophet Daniel of “a goat and a ram” is giving us plenty of information about the events that we can expect to happen in these last days. Understanding the meaning of this prophecy will give us the information that we need in order to prepare for what’s coming to the world. The “ram and the goat” in the prophet Daniel’s vision definitely covers a large chunk of our recent history as well as our current events to keep us well informed.

The “goat” in the prophet Daniel’s vision represents democracy and the first horn is the United States of America. Now if we relate this vision of “a goat and a ram” to the current world events, we can easily get a good picture of what is going to happen in the world in the near future.

As we all know, China is now the most powerful communist country in the world and it is in conflict with democracy. Specifically, it is competing with the United States of America politically, militarily, and economically to become the most dominant superpower in the world. And just last month in October 2020, the IMF reported that China has surpassed the United States of America as the world’s largest economy.

China becoming a rich communist country was also prophesied by the Prophet Daniel.

Daniel 11:2 Now then, I will tell you the truth: Three more kings will arise in Persia, and then a fourth, who will be far richer than all the others. By the power of his wealth, he will stir up everyone against the kingdom of Greece.

The prophecy that was given to Daniel by the angel Gabriel in the verse above can be interpreted as follows:

There will be four powerful communist nations that will arise in the world scene during the “time of the end”. The fourth powerful communist country will become far richer than the others. Because of his wealth, he will stir up everyone to challenge democracy.

By understanding the prophecy as interpreted above, we can easily point to China as one of the countries mentioned in this prophetic verse. China is the fourth richer king that comes from the kingdom of Persia. The other three nations are Russia, the Soviet Union, and North Korea. All of these communist countries have, or at least at one point, possessed nuclear weapons. The Soviet Union dissolved on December 25, 1991, with pressures from western democratic countries that included the United States of America.

We can clearly see that democracy with the United States of America being its leader is in conflict with communism. We saw how communism won in the former Soviet Union, North Korea, China, Vietnam, and Cuba. We also saw how democracy won with its struggle with the Soviet Union and other smaller communist nations. But democracy seems to be winning more just as this vision of the prophet Daniel prophesied. Eventually, as the vision prophesied, democracy will win over communism.

By understanding the prophet Daniel’s vision of “a goat and a ram”, it has, so far, pinpointed for us specific countries that are responsible for major events of our recent world history. It has also given us insight into the current events that are unfolding right before our very eyes in these last days. We now have insights also into the events that will still take place in the future.

This whole vision is not yet completely fulfilled. It is still being played out as we speak. But, we have seen some of them already fulfilled. Thanks to God, now we know how it will turn out eventually.

My friends, we have so much more to learn from the Bible and we have just started. We will continue to see where this vision of “a goat and a ram” by the prophet Daniel will lead our understanding next. God willing, may He send the Holy Spirit to be our guide. Until next time, may God bless you all!